iOgrapher on The New York Times


DAVID BASULTO, a high school teacher in San Marino, Calif., thinks you could do a better job with those photos and videos shot on your iPhone and iPad.

That is, if you had a little help from a gadget he built called the iOgrapher.

The device is a case about the size of an old videocassette. Snap the phone into the center of it, and you can then screw on a wide-angle or telephoto lens to take shots an iPhone normally couldn’t. The true value of the iOgrapher appears to be for those who want to make movies: Handles on either side of the case can help stabilize video shots, especially longer takes.

Mr. Basulto’s product, like several others made in recent years, is meant to appeal to students, journalists and other people who want to create professional-looking content without spending thousands of dollars or lugging around heavy equipment. These accessories add possibility — and polish — to the power of a smartphone camera.

“Look at how popular YouTube is,” Mr. Basulto said in an interview. “There’s a massive shift in the way the kids that I teach are starting to see the world. I want to empower them now, to tell them, ‘Any one of you can come up with a great story or show.’ ” 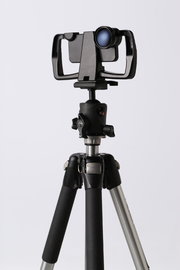 Beyond the ability to stabilize hand-held shots, the case can easily be mounted onto standard tripods. It also has a place to connect lights, a microphone or even a GoPro camera to supplement what you’re shooting.

You can buy the case for the iPhone 5 or 5S from iographer.com for $50 (one for iPads sells for $70), though you’ll need to buy additional gear like tripods, microphones or suction cup mounts separately. Mr. Basulto said he had no plans to produce versions for Android phones, but he did say he was developing a waterproof case.

A former Hollywood producer, Mr. Basulto, 49, began teaching video production at San Marino High School, just outside Los Angeles, six years ago. He wanted his students to produce lots of films, but there wasn’t enough equipment available. So he sent them out with what they did have: their iPhones and iPads.

“What we were getting back were good stories, but they were shaky,” he said. “The audio was horrible, or they were shot in portrait mode.”

He began working on a prototype iOgrapher case that could help his students shoot crisper, higher-quality videos. The idea seems to have caught on. Schools like Purdue University have started using them. The company recently developed branded cases for Hudl, a cloud-based start-up that lets sports teams capture and review game tape. And a BBC journalist used one to cover the World Cup in Brazil. 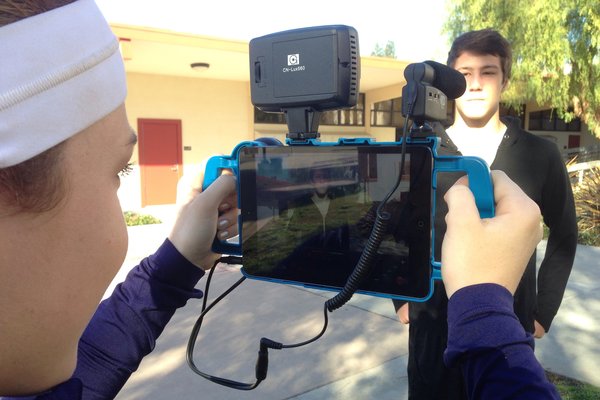 IOgrapher cases, which are also available for iPads, have places to connect lights, a microphone or even a GoPro camera to supplement what you’re shooting.

The challenge inherent in the iOgrapher and similar smartphone accessories is that sometimes we trade performance and ease of use for the convenience of having small, inexpensive production equipment we can carry in our pockets.

The first time I tried to put my phone into the iOgrapher case, I thought I might break it. It required a good amount of pushing and prying to make sure the phone was in properly and secure. Mr. Basulto assured me that the case wouldn’t break. It is made of a plastic blend that he says is hard to shatter. Still, I couldn’t help but cringe every time I inserted my phone.

Once I got my phone in, the case provided a pleasurable shooting experience. I was able to stand it up on a flat surface without a tripod. And having a wider grip from the handles allowed me to have a great degree of control when panning.

The materials used in the iOgrapher help keep the case light. The company doesn’t advertise the official weight of the case, but on my kitchen scale at home, the iOgrapher without any attached accessories weighed just under three ounces. Being so light, when I had a microphone and light mounted to the case, it felt as if my setup was top-heavy.

The iOgrapher works only with naked phones, so any protective case will have to be removed before using the phone with the iOgrapher, a potentially cumbersome requirement if you’re shooting on the fly.

Nonetheless, Mr. Basulto says demand for iOgraphers has been growing. Since November, he says he has sold 6,000 units. By the end of the year, he expects to sell triple that amount.

“I’m all about people making better content and showing them that they can do,” Mr. Basulto said. “Once you empower them with tools, you’ll start seeing better things being made.”